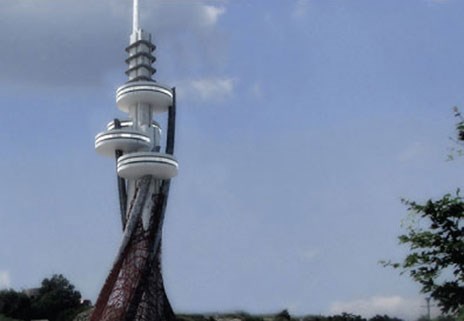 As one of the most impressive futuristic buildings erected in Skopje in recent years, the Telecommunication Tower on Vodno is a centrally reinforced 155-meter-tall concrete column, capable of accommodating four cantilever platforms with an area of 180 to 200 square meters. A steel lattice pole is also planned, with an antenna at the top. This new antenna system is intended for national operators' transmitters and the radio frequency control and monitoring system. In addition, the tower will have administrative offices, intended for the Agency for Electronic Communications (AEC) and the Ministry of Interior (MOI), as well as a revolving restaurant with a panoramic view of the capital. Having in mind the importance of this facility, the contractor – the Skopje-based construction company Granit – chose Cementarnica USJE as its supplier, using mainly cement type CEM I 42.5 (1,514 tons) and about 130 tons of cement type CEM II/A-V 42.5 R.