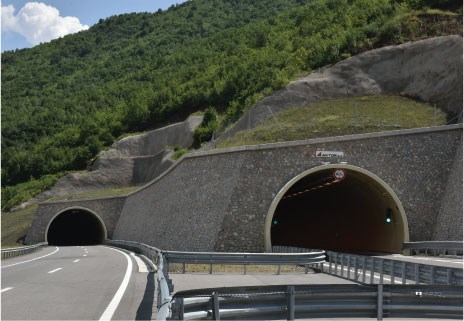 As part of Corridor 10, the Demir Kapija - Smokvica section represents a modernization of the highway infrastructure in the Republic of North Macedonia and a significant approximation to EU standards. This 28.2-kilometer-long section was a complex project both in terms of geology and geo-technics, primarily due to the construction of very specific tunnels, viaducts and high embankments. Along the entire route, more than eight million cubic meters of high embankments and deep field excavations, six bridges, two tunnels (1.2 km in length), two junctions at Miravci and Smokvica and 100 canals have been built. Cementarnica USJE was part of this project by supplying the project contractor, the Greek company AKTOR, with cement type CEM II/A-V 42.5 R for all concrete constructions. The quality of our product additionally contributed to this highway's safety and the high standards set for this section. The project is funded by the EBRD, the EIB and the Budget of the Republic of North Macedonia.